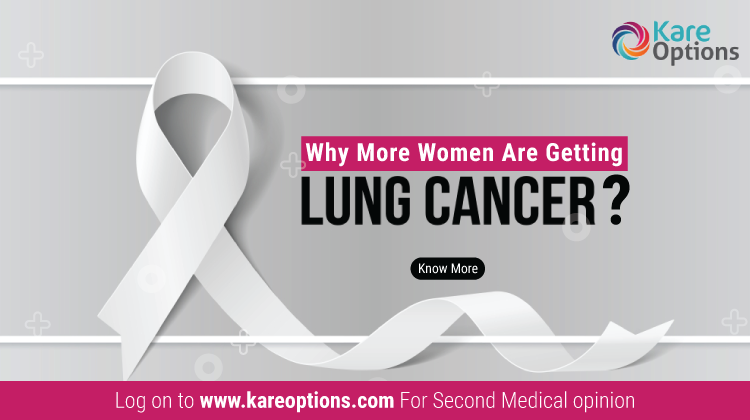 A higher incidence of cancer in women points to the need for a second opinion. Here’s a rundown of the latest research evidence on this subject. Recent data indicates that more women than men in their young age (between 30 and 54 years) risk falling prey to lung cancer. The main cause is cigarette smoking. If you are one of those on the lookout for the best oncologist or a second opinion for lung cancer, then the study summarized here is relevant.

Jemal and the team carried out a nationwide study in the United States to explore the incidence of lung cancer. This study could have important implications for lung cancer treatment. The research team studied the data using several variables including ethnicity, sex, age, period of diagnosis, birth year, and incidence rate. They compared females and males in their population data between 1970 and 2016. On studying the data scientists found important conclusions for physicians and patients.

When scientists studied data from the past two decades, they found that the illness declined faster among males than females. This trend showed up in the Hispanic and non-Hispanic populations. It shows a trend reversal of the 1960s data. A rise in women smokers in the United States seems to be the cause behind an increase in the incidence of lung cancer.

Scientists also found that the risk of adenocarcinoma is more common in women than men. This risk decreases slower than the other cancers once an individual quits smoking. Annual risk-reduction figures indicated 17% for small-cell carcinoma. Risk reduced by only 8% for adenocarcinoma. Scientists are not sure why women may have become more susceptible to lung cancer.

Genetic evidence identified higher mutation frequency in driver genes, KRAS, and TP53 oncogene. But, it does not serve as a convincing aspect of its root cause. Other factors may be responsible for the development of lung cancer in women. These include exposure to lung carcinogens in the workplace. Chemical exposure such as arsenic and asbestos is another cause. Cancer from these causes was more common in men in the past, but there has been a decline. This decline may point to the decreasing incidence of cancer in men. Another factor studied was secondhand smoke. But there is little difference among men and women with regard to exposure to secondhand smoke or outdoor air pollution.

Most Likely Cause for Lung Cancer in Women

One specific finding that explains the higher incidence of lung cancer among women is the frequent incidence of indolent lung tumors among women. These tumors were detected using diagnostic imaging. Scientists also examined computer tomography (CT) screening data and identified the prevalence of lung cancer. Results suggested that it was twice as much in women than men given the same smoking history and age. This suggests that cancer progression may be slower among women and is an important finding for the best doctor for lung cancer.

Scientists concluded a higher incidence of lung cancer among Hispanic and non-Hispanic women born after the mid-1960s. This cannot be explained on the basis of smoking behaviors and gender differences. The public health perspective in this connection points to the possibility of a higher lung cancer burden among young women. This means that anti-tobacco measures need to be stepped up. Furthermore, women who have received a cancer diagnosis must know that there may be several underlying factors. This not just uncovers the type of preventive measures required but also justifies why a second opinion is the best way forward.